Our eye consists of two fluid systems. They are “vitreous humor” (also called vitreous body) and “aqueous humor”. These both fluids have similarities but they are not to be mistaken with each other because they do have certain and major differences as well. Talking of the similarity they both are the intraocular fluid. The similarity also lies in their purpose which is to keep the eyeball pressure maintained for the proper functioning of eye optical. Next, the difference is that vitreous humor is behind the lens and the other is in front of the lens. Another difference between these two is that the former one is a gelatin-like substance and does not flow freely, while the other one is freely flowing fluid.

The term “aqueous humor” seems quite difficult for people not belonging to medical fields. But it is nothing but a name given to the fluid system, or water-like substance with certain compositions, and that flows through, also fills both anterior and posterior chambers of the eye. It is often confused with vitreous humor because of its location and where it is placed in the eye. Also, it is a water-like transparent fluid, which is the same as plasma but aqueous humor comparatively has a low concentration in terms of protein.

Since it is a fluid substance, the location can’t be traced to a particular location. Rather, it glides between the anterior (placed between the iris and the inner surface of the cornea), and the posterior (located behind the lens and in front of the eyes) chambers of the eye.

Coming on to what does it contain in its liquid. The major constituent of this fluid is albumin. It has protein, and γ-globulins and all the three are present in less quantity as compared to the plasma. Plus, lactic acid, glucose, ascorbic acid is also found in aqueous humor. Additionally, some electrolytes are further composed of sodium, potassium, calcium, magnesium, chloride, HCO3, phosphate, and Osm.

98% of the fluid contains water.

The ciliary body produces transparent fluid. The ciliary body has two parts, anterior and posterior wherein the anterior part has folds and the posterior part is a plane. The body basically has three structures, known as ciliary muscle, ciliary body stroma, and ciliary epithelium. Under the ciliary muscle, there is a highly vascular stroma that has a role in the production of aqueous humor. Over the stroma, there is the ciliary epithelium that is non-pigmented, which plays a major role in the formation of aqueous humor.

The above-mentioned steps are the basic mechanism for the secretion of aqueous humor.

The walls in the stroma and where this process occurs are such that they allow stromal fluid to flow through them, from which aqueous humor is produced. Aqueous humor synthesized by the ciliary body leads to the emission of aqueous humor in the posterior chamber.

Initially, it was believed that aqueous humor is somewhere in a static form and not flowing. Only after the experiment done by Seidel in the year 1921, it was proved that this indeed has a circulating property.

The fact that might sound interesting to you is that Seidel chose rabbits to experiment with. What did he exactly do? Seidel connected a tube-like structure filled with blue dye to a rabbit. It was noticed that when the tube was lowered, it was filled with clear fluid from the anterior chamber. And when that tube structure has raised the dye that was filled in that tube entered the eye and ultimately was seen in the blood of episcleral venous plexus. And then Seidel concluded that the formation and drainage of aqueous humor must be a continuous and process. After his conclusion, a lot more experiments were performed that further gave various other conclusions min relation to it.

While circulating through the eye, aqueous humour performs very important and quite several roles. 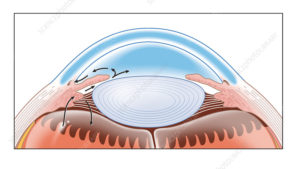 Aqueous humour is something that is continuously being produced at the rate of about 2.5 micro-litre/min and so it should be drained somewhere also. Usually, it takes an hour or so to get all the fluid replaced.

As mentioned somewhere above the Aqueous Humour comes into the posterior chamber.  After this, it flows through the pupil into the anterior chamber. Now it has to go into blood circulations. So what happens is that there is a net-like structure called meshwork present in between the iris and cornea. This meshwork has an opening canal from where the aqueous goes into the blood.

This was all about Aqueous Humour that actually has a major role in our eye and its proper functioning. Because of Aqueous Humour disorder, the eye could face serious troubles like glaucoma.