We consider that you must have specifically searching to know about Phaco Surgery when your search results must have shown this blog link. Therefore, we are moving straight to the world of Phaco-emulsification, instead of going about explaining Cataract Surgery, etc.

What is Phaco Surgery?

In earlier days, the cataract surgery used to be carried out with an incision of about 8.0 to 10.0 mm in length. Then, through it, the cataract was removed. Next, an intraocular lens was implanted. Whereas, nowadays, Phaco or Phaco-emulsification Surgery, has got quite the preferred method to get the cataract removed.

In Phaco Surgery, a cataract is broken into small pieces and removed from the eye. A tiny incision is placed in the eye, and a hollow Phaco needle is entered through the opening. The size of the incision is between 2.5 to 2.8 mm only. It is done by using ultrasound with the help of a special phaco equipment.

By sending energy via the tip of the Phaco needle, the cataract lens gets dissolved and is sucked out with the help of this needle itself. During Phaco Surgery, the cataract is removed but most of the thin outer membrane of the lens, called the lens capsule, is left in place. The incision is made on a side of the cornea (the clear outer covering of the eye). The needle emits ultrasound waves that soften and break up the lens into little pieces so it can be suctioned out.

Next, an artificial lens called a Foldable Intra-Ocular Lens is injected inside through this small opening. Once inserted into the eye, it opens up and serves to replace the original lens. Since the opening incision has been made very small, it self-seals, and no sutures are required to close the wound. It would be a very rare case when a single stitch may be needed.

That is how this procedure has come to be known as “Stitchless” cataract surgery.

Once the eye doctor has removed the natural lens, it is, generally, replaced with a clear plastic lens called an Intra-Ocular Lens (IOL). The IOL is placed in the lens capsule that gets left in the eye. The artificial lens can focus light on the retina of the eye and improve sight.

The type of IOL implant that will work best for you will depend on your current vision status, the problems, your vision and lifestyle needs.

An ophthalmologist and cataract surgeon would be able to advise the most suitable lens implant to you.

It is a technique of Phaco-emulsification Surgery wherein the cataract is emulsified using ultrasound. The incision size is approximately 3.0 mm long.

Lenses used in Regular Phaco are slightly firm. Therefore the incision size required is somewhat longer at 3.0 mm so that the lens can be inserted. Following is the list of the IOLs that are used for Regular Phaco: 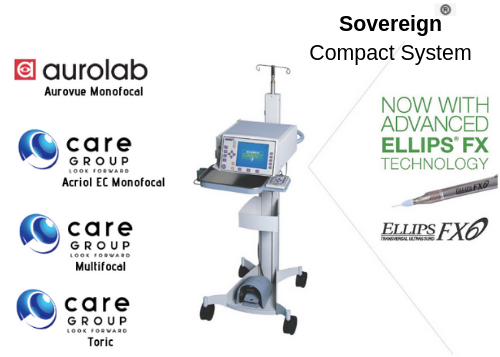 The smaller incision enables high-quality and minimal invasion during surgery, better results and less disruption of tissue. The entire procedure has improved the stability of the wound, thereby faster recovery.

Features, that are also advantages of opting for Micro-Phaco are:

Lenses used in Micro Phaco surgery are soft lenses that can easily go through a micro-incision of 2.2 mm. Cylindrical also means a three-dimensional optical defect. A lot of times cylinder may have an optical defect, generally termed as Regular Astigmatism in professionals language. It is an eye defect that causes a Visual Blurring that cannot be corrected by a single spherical glass. Astigmatism requires the correction of the “cylindrical” or glass cylinder, a toric lens, or a toric implant. It is a completely operable defect.

Astigmatism is quite common before and after cataract surgery. Almost one-third of the cataract surgeries performed have at least 1.0 diopter (D) of astigmatism. This causes noticeably blurred vision without eyeglasses or contact lenses.

We discuss here the case of Cylindrical Defocus which corresponds to irregular astigmatism regular that cannot be corrected by glasses. It only corresponds to all the optical aberrations of high degree that are correctable by surgery.

The cylinder defect can be corrected by Phaco Cataract Surgery in two ways. During Phaco Surgery a toric IOL may be used to correct astigmatism when a cataract is removed: Because this IOL is put securely inside the eye, it can provide a more durable correction of astigmatism than a toric contact lens, which moves on the surface of the eye with each blink.

Toric Lenses with Manual Marking: The toric IOL can be aligned at the intended axis by several methods. Most of these use a 3-step ink-marking procedure and are performed manually. Researches showed an average error of 5% in toric IOL alignment when working manually.

These tools integrate digital guidance for the alignment of toric IOLs, with a manual assessment. They have the potential to reduce the error in horizontal axis marking and the alignment axis marking error. This will lead to a much better result in vision.

Expectations of patients from cataract surgery have increased significantly over the past few decades as surgeons are gradually moving from conventional extracapsular techniques to clear-cornea phacoemulsification. They expect spectacle independence following cataract extraction, in addition to short operating times, topical anesthesia, and a stitchless procedure.

Please remember that medical information provided here is to be used as an educational service only. Without actually visiting an expert eye doctor, you should not treat this as a medical consultation.

You must visit an eye specialist so that she can understand the difficulties you are facing. She will be able to judge better about the appropriateness or risks of a procedure for you. To know more, please visit our website. Or you can email us on eyemantra1@gmail.com.

Our other services include Cataract Surgery, Specs Removal, Retina Surgery, and many more.

You may also check: