Every surgical operation involves some kind of risk.  With advances in Science and Technology, squint surgery has evolved a lot. But when you look into squint surgery disadvantages, like every other surgery, it also has some or other limitations or disadvantages.

Also called strabismus, a squint is an eye condition where both the eyes are unable to align in the same direction. Either of the eyes turns inside upsidedown words about words,  and the other eye focuses on a point. This can either happen every time the eyes are focusing on some objects or you might notice that it is sometimes happening and sometimes not.  The main reason behind this is that the eye muscles responsible for the control of the movement of the eye and eyesight are not working together.  These muscles are called extraocular muscles. And since the extraocular muscles are not able to control the movement of the eye and the island both the eyes fail to focus at the same point at the same time.

One of the must-need benefits of squint surgery is that it increases your peripheral vision.  Talking of appearance,  after squint surgery the appearance of the patient improves. Because it doesn’t allow your eyes to look straight.  Rather it looks turned either towards up down right left. Squint surgery sometimes also improves depth perception.

Every surgery or operation involves certain chances of risks and complications during surgery, or after the surgery. However, out of 1000 cases, 2 or 3  face severe issues. Some of the squint surgery  disadvantages are mentioned below:

Since squint surgery has to go through a complexity of the system it can solve only a portion of those complexities.  Also, some forms of squint respond better than others.  And some problems cannot be corrected by surgery.  Every patient is given an explanation by the doctor on the application of the generalities to their condition.

The most prevalent squint eye problem in children is strabismus. It may, however, grow up to be an adult. According to the National Institute of Ophthalmology in 2011, this issue affects 4 percent to 6 percent of the Indian population. This issue can now be treated in 93 percent of instances thanks to a plethora of innovative methods. However, if alternative therapies fail to fix the squint condition, surgery may be necessary as a final resort.

Because it is more prevalent among children, it is critical to first guarantee their safety before making a decision. The following are some of the dangers associated with squint surgery:

1. The patient may require a squint correction depending on the degree of the squint.

2. The squint problem might recur. Because the operation entails repositioning the eye muscles, this is a possibility.

3. In certain circumstances, the patient may suffer double vision. It returns to normal as the eyes acclimatize to seeing with both eyes at the same time.

4. There might be long-term redness in the operated eye. It occurs as a result of the development of scar tissue on the eye’s surface. It causes eyesight to become hazy and distorted. This is something that might be fixed medically.

5. Deep sutures can sometimes cause damage to the interior of the eye. Alternatively, a small hole in the white of the eye might occur. This is treated further with a laser method.

6. A squint is repaired by shifting the eye muscle forward or backward to adjust the position of the eye. After or after the procedure, this eye muscle may slide. This causes the eye to turn inwards or outwards, resulting in a jerky eye movement. If the condition is serious, it may not be possible to treat it any longer.

7. The operated eye may, on rare occasions, get infected. Eye drops, as prescribed by the doctors, might be used to treat it. If such a problem arises, the patient must notify the doctor as soon as possible.

However, it is important to remember that people only suffer these problems on a very infrequent basis. They’ve been listed to keep patients up to date.

It is claimed that the only surgeons who do not have problems are those who do not operate or lie about not having difficulties. All operations include the potential of complications, and there is no way to avoid having one at some point in your life. In this way, strabismus surgery is no different. There are actions that may be done to decrease the chance of a problem before or after surgery, and they should be followed at all times. When a complication arises, it is critical to detect it and then handle it correctly to ensure the best possible outcome.

Inadvertent advancement plica semilunaris conjunctivae (often simply referred to as plica) typically results from the suturing of plica to the conjunctiva adjacent to the limbus. This complication may occur following strabismus surgery using a limbal incision. During standard limbal surgery, the anterior aspect of the limbal conjunctival flap becomes folded beneath the plica.

Chemosis is common in all individuals after strabismus surgery, although it can be severe in some cases. Severe chemosis is uncommon after conventional strabismus surgery, although hydraulic dissection can damage the suspensory attachments to the conjunctival fornix. Prolonged protrusion of the conjunctiva might cause the folds to fuse together, necessitating surgery.

Pyogenic granulomas are characterized by a fleshy red tumor that grows quickly. A proliferative fibrovascular reaction to prior trauma, including surgery, has caused the lesion. In the vast majority of instances, these lesions will resolve on their own. Although the effectiveness of topical steroids has not been proved, many surgeons suggest them.

A slipping muscle is a disinserted rectus muscle that retracts posteriorly inside its muscle capsule following reattachment to the globe, while the empty capsule remains connected to the sclera at the intended new insertion location. A slipping muscle should be distinguished from a lost muscle, which has no part of the muscle, including its capsule, connected to the sclera.

When an extraocular muscle is destroyed, unlike a slipping muscle, there is no direct connection between the muscular tendon and the globe. Both the muscle and its capsule retract into the orbit posteriorly. 21 In contrast to the modest duction loss observed with a slipping muscle, a patient with a missing muscle frequently presents with significant consecutive strabismus and an accompanying large duction deficit within hours or days of surgery.

Patients with a stretched scar after strabismus surgery may appear in the same way as patients with a slipping muscle. 23,24 Overcorrection with a slipping muscle, on the other hand, usually happens soon after surgery. Overcorrection, on the other hand, happens many months later in stretched scar syndrome. An amorphous scar tissue separating the muscular tendon from the scleral attachment point is commonly observed after reoperation. The recurring deviation is thought to be caused by scar lengthening following surgery.

This is one of the most effective exercises when it comes to doing something for your squint.  it improves your ocular progress in such a way that both the eyes are detected and the same and fixed point. Hold a pencil at an arm’s length pointing away from you.  Focus your site on the eraser or a letter Auron numeral written on the side.  Slowly get the pencil closer towards the bridge of the nose.  Remember to do it very slowly. Keep focusing as long as you can and stop at the point when your vision gets blurry. 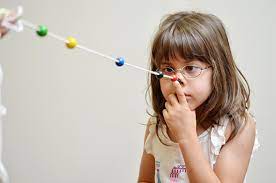 Get a 5 feet long string with three different color beads in them. hold one end of the string to a fixed point search as a handrail or at the back of a chair.  make an equal space between the beads.  hold the other end of the string firmly to your nose you should be noticing a consistent and the same at on as you are shifting your focus from beat to beat.  the bid you are focusing on will appear by itself at the convergence of two identical strings with double of the Other beings forming an “X”. If you see the strings crossing in front of the bid or in the back of the bid then your eyes are not properly focusing on the bead. You need to make sure that you are saying the “x”  at all beads,  except the one at the far end which will just have the two strings coming out towards you in a “v”.

This exercise is very effective in exotropia.  What you need to do is to draw 3 red barrels each of an increased length than the previous one on one side of a card.  Repeat the same this time with green on the other side.  Hold the card vertically against you are known in such a way that the largest barrel is at the greatest distance.  Stare at the barrel that is at the farthest distance from you and keep staring until it becomes 1 image with both colors and the other two images of the barrel get doubled.  Keep Focusing and gazing for about 5 seconds.  After this repeat the same with the middle and the smallest barrel images.