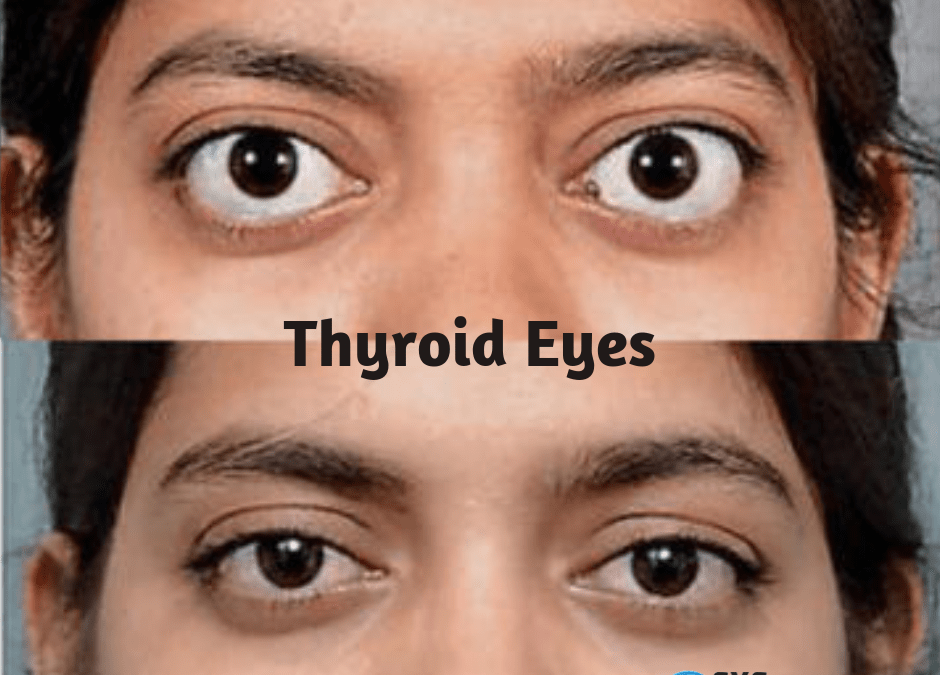 People with thyroid disease sometimes tend to develop an eye condition that causes the immune system to attack the muscles and other tissues around the eyes. This inflammation of the Thyroid Eye Disease causes the eyeballs to look as if bulging out of their sockets. The inflammation is due to an autoimmune reaction – the body’s immune system attacks tissues within and around the eye socket.

In thyroid eye disease, the immune cells attack the thyroid gland which in turn responds by secreting an excess amount of thyroid hormone. Due to this, the thyroid gland enlarges and excess hormones increase metabolism. The hypermetabolic state is characterized by fast pulse/heartbeat, profuse sweating, high blood pressure, palpitations, irritability, heat intolerance, weight loss, fatigue, loss of hair and alterations in hair quality. When the immune system attacks the tissues within and surrounding the eyes, it causes the eye muscles or fat to expand.

The eyes are particularly vulnerable to this disease because the autoimmune attack often targets the eye muscles and connective tissue within the eye socket. This happens because these tissues contain proteins that appear similar to the immune system as those of the thyroid gland. Symptoms of this Ocular disease can range from mild to severe. But the threat of vision loss may be only in 10-20% of patients. Very rarely, it would get severe enough to cause loss of vision.

Thyroid eye disease (TED) is sometimes also known by other names, such as

It shows up most commonly in Hyperthyroid patients (77%), and less frequently in Euthyroid (20%) and Hypothyroid (3 percent) patients. TED can appear before or after the thyroid disease. Usually within 18 months of each other in most of the patients. Although the severity and duration of the disease vary greatly, still, TED is a self-limiting disease that lasts about one year in non-smokers and three years in smokers.

TED, generally, occurs between the age of 30 up to 60-years. Women have 5 times more chances of contracting it than men. However, men tend to exhibit more severe symptoms of the disease and present at a more advanced age.

Smoking is the strongest risk factor resulting in the severity of the disease, which is less responsive to Immuno-Suppressive therapy.

Earlier, it was believed that the treatment of Hyperthyroidism using Radio Active Iodine (RAI) has been associated with the development or worsening of TED. However, further studies have suggested that the rapid stabilization of the thyroid hormones after RAI treatment can prevent adverse progression.

Some researches have linked TED to being genetically transferred, but specific evidence is yet to be affirmed.

Although Thyroid Disease and Thyroid Eye Disease both stem from the immune system’s attack on healthy tissue, one disease does not directly cause the other. Hence, getting the thyroid gland treated, would not, necessarily, improve the eye disease. The two diseases run their separate courses and may not even occur at the same time.

TED can cause inflammation that may affect the muscles and other tissues surrounding the eyes. Symptoms may be:

TED may go through varying degrees of severity. It may also have periods of remission. It often lasts 1-2 years. When it has been inactive for a period of around 6-months, it’s less likely to recur.

In more advanced stages there may be a decrease in eye movement and eyelids, incomplete closure of the eye with corneal ulceration, compression of the optic nerve and rarely, loss of vision.

Thyroid disease is caused by a malfunction in the body’s immune system. The exact reason why this happens is still not known.

The normal immune system response to a specific virus, bacterium or other foreign substance, is the production of antibodies designed to target them. In Thyroid disease, the body produces an antibody to one part of the cells in the thyroid gland, a hormone-producing gland in the neck.

Normally, thyroid function is regulated by a hormone released by a tiny gland at the base of the brain, known as the Pituitary Gland. The antibody associated with Thyroid — Thyrotropin Receptor Antibody (TRAb) — acts as the Regulatory Pituitary Hormone. That means that TRAb overrides the normal regulation of the thyroid, causing an excess of thyroid hormones (Hyperthyroidism).

This condition results from the development of certain carbohydrates in the muscles and tissues at the back of the eyes — the cause of which also isn’t known. It seems that the same antibody that can induce thyroid dysfunction may also have an “attraction” to tissues surrounding the eyes.

TED is an autoimmune eye condition that, while different from thyroid disease, is often seen in conjunction with it. About 25% to 30% of people with Thyroid disease have light symptoms while only a tiny percentage develops a severe form.

The condition, however, is seen in people with no other sign of thyroid dysfunction. Most thyroid patients, however, will not develop thyroid eye disease. Even if they do, it will mild only.

Smoking is associated with a worsening of symptoms. 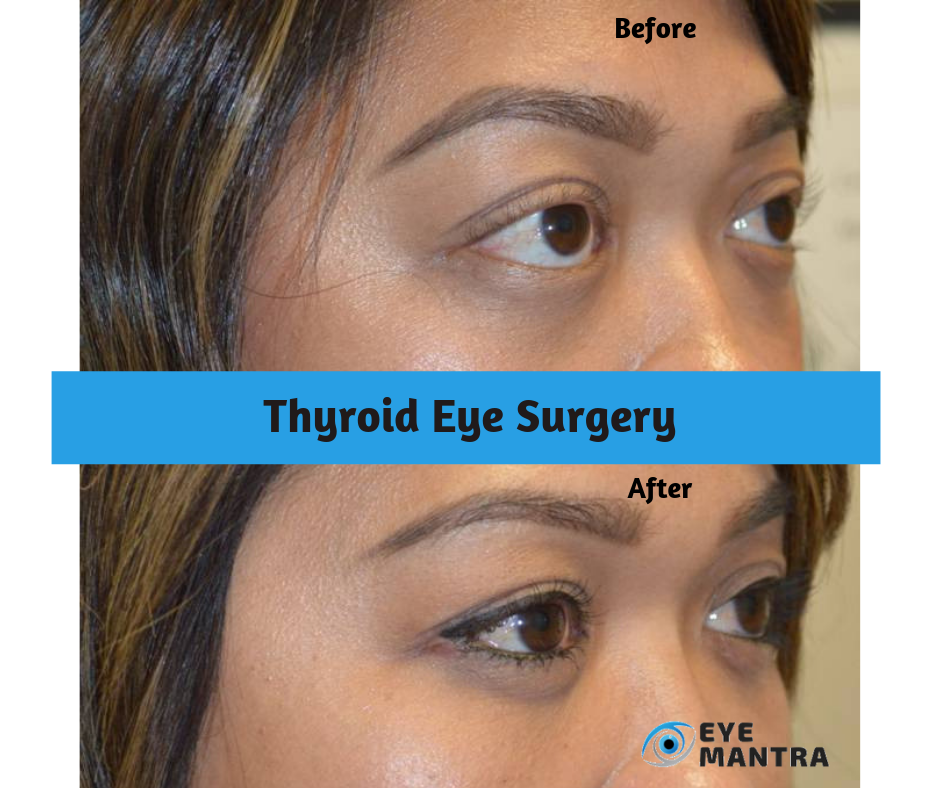 For a mild case, you may be prescribed lubricating Eye Drops and artificial tears a few times during the day. Avoid wind and bright light. If you have severe symptoms, your Eye Doctor Delhi may prescribe corticosteroids such as prednisone to reduce swelling. In only a few patients, orbital decompression surgery may be recommended. This procedure removes the bone between the eye socket and the air sinus behind it so your eye has more room. This can improve your vision but there will be a risk of double vision.

Double vision can also occur when scar tissue from the Ophthalmopathy cuts the eye muscle too short. Eye Muscle Surgery can be used to correct the length to provide a single vision. However, more than one surgery may be required to be successful.

Here we discuss the best techniques for treating patients with TED.

Vitamins: Supplementation of selenium has proved to reduce the severity and progression of disease in patients with mild thyroid eye disease. Dosing is best started as early as possible in the course of the disease, preferably within 6-months of the onset. No proper researches have been conducted on the benefits of vitamin D supplementation in patients with TED, however, laboratory studies have shown an anti-inflammatory effect. Getting the vitamin D blood levels checked and supplemented appropriately, may actually prove to be helpful. Beyond this, a good multivitamin and a healthy diet low in fats and processed food are beneficial for both the overall health and gastrointestinal.

Topical medicines: Topical Eye Drops or Ointments are most commonly prescribed to treat Ocular Surface disease. In the early and active phase, inflammation of the Ocular Surface contributes to dry eye. This often responds to a low-dose steroid such as Loteprednol or Fluorometholone. Whereas in the later stages of the disease, chronic exposure is the main cause of dry eye and can be addressed with lubrication. Artificial tears, gel, and nighttime ointment are often necessary. While finally surgery may be required, an aggressive topical regimen can greatly improve the quality of life for patients suffering from TED.

Steroids: Steroids are excellent for reducing symptoms in TED, but do not make any changes to the disease. They only improve upon the soft-tissue symptoms in the stage until the body can pass into the stable later phase of the disease.

Steroids can be given as direct injections into the orbit, as intravenous infusions, or as pills. Direct injections can be given as often as every four weeks in the clinic and provide significant symptomatic relief for patients who have congestion, eye pain or a dull ache. They are especially helpful: if the disease is asymmetric, if a patient has diabetes or another health condition that makes other forms of steroids risky.

Intravenous steroids are known to have greater efficacy than oral steroids (80 to 50).

While this is not a cure for TED, it does reduce the clinical severity and improves the patient’s quality of life. But almost 10% of patients are resistant to steroids. Taking steroids also risks the patient to insomnia, liver failure, diabetes, psychological changes and, sometimes, even death.

Since this treatment doesn’t change the course of the disease, the decision of whether or not to undertake this mode of treatment is very personal. Except when the patient experience vision loss.

Orbital radiation: Radiation is helpful in cases when the inflammation is persistent. Most of the time, it is prescribed with steroids. Because the combined effect of radiation and steroids together is greater than either alone. Common side effects can include dryness of cornea or the development of Cataracts. Radiation may be particularly helpful in patients who have Squint Eyes and double vision, although it doesn’t cure or shorten the course of active thyroid eye disease.

Biologic therapy: Biologic therapy, or customized molecular medicines that precisely target the abnormal biochemical pathways in TED, is the promising hope for the future. Moreover, the medicines are quite expensive, precluding a large-scale randomized trial from being conducted. Biologic medicines and targeted molecular therapy need a lot more research.

Orbital Decompression: Orbital Decompression surgery is the main way for the rehabilitation of TED patients. It can recover nearly every loss due to the disease. Whether it is vision-threatening optic nerve damage or corneal exposure to cosmesis. Quality of life is much improved after surgery since it improves orbital congestion, pain, and dry eye. General complications include double vision and scarring – depending on the technique used. Very rarely it may result in vision loss (less than 0.5%, partial or total in the operated eye). Though these can be minimized with newer, minimally invasive surgical techniques. This surgery is performed on an outpatient basis, with general anesthesia through invisible skin incisions hidden in the natural folds of the eyelids. It may last from 60 to 90 minutes.

Strabismus surgery: Squint Treatment surgery is quite common. Mostly performed to adjust the extraocular muscles and improve double vision. However, for TED, Strabismus surgery is much more complicated than the typical one. It would need to be performed by the Eye Doctor Delhi, who is well-experienced in thyroid eye disease. This surgery takes about 30 to 60 minutes. It can be performed under general or topical anesthesia and is done on an outpatient basis. Patients can have significant improvement depending on how many muscles were operated upon.

Eyelid Surgery: Surgery to repair eyelid retraction is often undertaken as a final step in rehabilitation. This step can also be the most sensitive, as the eyelid structures are fine and unpredictable. However, significant improvement is generally achieved. Surgery is performed under local anesthesia, can take between 30 to 60 minutes, and is done on an outpatient basis.

Cosmetic Surgery: While TED primarily affects the tissues inside the orbit, significant changes are visible in the skin and fat in the eyebrows, cheeks, neck and other areas of the face. These changes can be approached with a combination of Lasers, Fillers, Eye Botox (i.e. Botulinum Toxin), or even surgery of eyelid, eyebrow, face, and neck. Great care must be taken when undergoing Oculoplasty Surgery in the context of thyroid eye disease: Treating a TED patient in the same manner of other cosmetic surgery patient can, at best, lead to a hollow, unnatural look and, at worst, lead to severe corneal exposure and loss of vision or even loss of the eye.

If you are facing any of the symptoms mentioned above, please visit an eye specialist Now.

To book an appointment with expert ophthalmologists with many years of experience, call at +91-8851044355.

To know more, please visit Eyemantra. Or you can email us on [email protected].

We specialize in Cataract Surgery, Specs Removal, Retina Surgery and many more.

Retinal detachment: What is it, Causes, Symptoms, Surgery & treatment in Delhi