Every person born on this earth is born with their uniqueness. Nature provides each human being with different face shapes, eye colours, skin colours, hair colour, hair pattern, etc. Mole on the eye is one of them. They can be present right from the birth of a baby, or may develop  at any point of your lifetime. Usually, they are considered as a spot or a cluster of mere pigmented cells of the skin on your body. But it’s not just that. There is much more that you don’t know about them.

Going into medical terms, the moles are called “nevi” (singular: “nevus”). They are also called “freckles”. And mole on the eye is therefore called “eye freckle”, or sometimes “eye nevus”. So here are a few most important key points regarding mole on the eye you need to look into.

What Is Eye Freckle Made Up Of?

We all know that the white part of a healthy eyeball (known as “sclera”) is proper white. And what if it’s not? The lack of white pigment in your sclera could be a signal of something wrong.  There can be a lot of reasons for your eyes to be turning any other colour other than white.

A mole in the eye is a pigmented cell. And if they are a bit bigger, they are clusters of those pigmented cells. And it is built of melanocytes that are the cell responsible for the colour of your hair, skin, and eyes. So how nevi are formed? These melanocyte cells are present everywhere in the body tissues, which sometimes get congregated and form nevi.

Types of nevus (moles on eye)

The mole on the eye can be divided into two categories on the basis of their visibility. They are:

Visible moles on the eye 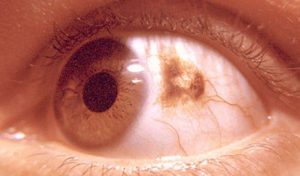 This nevus type is one of the most common types of the mole on the eye. It is a spot-like mark on the transparent sheet called, conjunctiva (that covers the eyeball). After it appears in the eye, it tends to get lightened and darkened over a while. The colour of the mole in the eye can range from yellow to brown.

However, conjunctival nevus generally does not cause harm to your eyes or vision, but in case if it grows, it could be as dangerous as cancer, called melanoma in this case. You should consult your ophthalmologist at the very time it appears in your eye and has it examined regularly with passing time.

They do not develop into melanoma and therefore are not harmful. There in the iris appears some freckles that are dark brown. And as melanin holds the responsibility for the moles on the skin, it does the same for such moles of the eye, called iris freckles.

This is similar to the above. However, there is a difference that lies in their size. Iris freckles are smaller as compared to this iris-nevi. Therefore, being larger, they tend to be harmful with growing time. Most importantly, as it grows, it moves into your stroma.

They are not cancerous but an ophthalmologist needs to examine that mole on the eye, or the coloured part called, iris-nevi in this case.

Invisible Moles On The Eye

These moles on the eye fall under the category which does not appear in the outer part of the eye. Rather, they find their place somewhere behind. That is why they tend to be more dangerous. You can very well take actions on things causing harm to you but only if you are aware of them. What if the situation is the other way round? Here is one such example of those conditions: 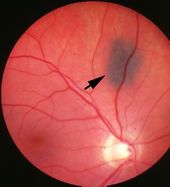 This is found inside the eye. To be more specific, it builds its place under the retina, where there is a layer of tissue called the choroid. You will be needing medical help if it is raised. They could develop into melanoma. Colours could be grey, yellow, and brown. They can even have multiple colours. Sometimes it generates fluid and turns orange when they grow constantly.

Symptoms Of A Mole On The Eye

It is but obvious that you don’t have any option but to see your ophthalmologist if you feel there is a colour change in your sclera. They will need to perform a routine examination of the mole on the eye over some time. Every time you visit them, they are going to have images of the nevus and compare them with the previous one. This will help them tell whether your nevus is constant or is it growing in its size and shape.

In the case of choroidal nevus, the professionals use the technology called, OCT (Optical Coherence Tomography). It is an imaging technology that uses light waves to take clear and thorough pictures of your retina. Since choroidal nevus is the internal mole on the eye, this technology helps in better examination of the nevus.

There should be a regular visit to your ophthalmologist. They might ask you to come every six months or even before that as per the requirement. The nevus is not harmful or cancerous if it does not grow over one or two years. However, it can even grow somewhere in your later years. Following up on the scheduled routine eye exam is highly recommended.

Treatment For A Mole On The Eye

However, the nevus on the eye is usually not harmful and they might not affect the vision. But in the case of an outer nevus on the eyeball where it is troubling your vision, they might recommend surgery for the removal of the mole on the eye. Such cases happen seldom, though.

Your ophthalmologist is not going to have the treatments done in case it is not required. They will start treating them and go for some treatments such as radiation, laser therapy, or even removal of the eye in some cases, if only it is required.

Patience is the name of the game here. You and your ophthalmologist need to wait and watch the nevus minutely. Such a treatment is the only option left if the examiner considers the cancer treatments on the patients can cause serious issues to post that.

Visit A Doctor For A Mole On The Eye

Well if you are quite sure that the mole is not problematic, you might not visit them, yet be cautious and just don’t pose a carefree attitude towards it. And in case if it causes eye pain, vision issues, or things like that, you must hurry up to your ophthalmologist.